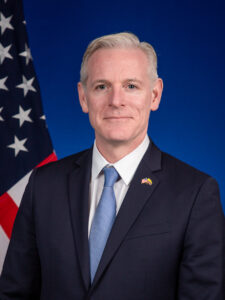 Brendan O’Brien arrived in August 2022 to assume his role as the Deputy Chief of Mission, overseeing 53 agencies in advancing U.S.-Colombia bilateral relations. A Senior Foreign Service Officer with the rank of Minister Counselor, Brendan most recently served as the Chargé d’Affaires at the U.S. Embassy in San Salvador, following two years as the Deputy Chief of Mission. Brendan served as Acting Deputy Chief of Mission and Consul General at the U.S. Embassy in Buenos Aires, Argentina (2014-2017). He was the Director of the Office of American Citizens Services and Crisis Management in Washington D.C. (2012-2014).

Brendan served two tours at the U.S. Embassy in Kabul, Afghanistan as the Consul General and Press Attaché (2008-2010) and then worked on the Afghanistan Desk in Washington D.C. He also held various diplomatic positions abroad in Bogota, Colombia (2005-2007) and Canberra, Australia (2003-2005). Prior to the State Department, Brendan was an International Advisor at Middlebury College in Vermont, the Coordinator of the Boston Peace Corps Office, and a Health Volunteer for the Peace Corps in Paraguay.

Brendan earned a Masters in International Relations from Universidad Externado in Bogota, Colombia and a B.A. in Literature from Saint Anselm College in Manchester, NH. He speaks Spanish, Dari, and Guarani.