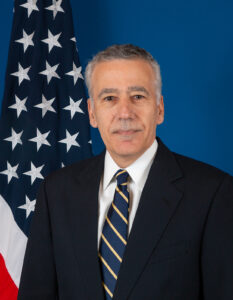 Philip S. Goldberg was confirmed by the U.S. Senate as Ambassador to Colombia on August 1, 2019. Most recently, he was a Senior Diplomatic Fellow at Georgetown University’s Institute for the Study of Diplomacy.  In 2018, he served as Chargé d’Affaires at the U.S. Embassy in Cuba.

From 2013-2016, Ambassador Goldberg served as U.S. Ambassador to the Philippines.   Prior to that assignment, he served as Assistant Secretary of State for the Bureau of Intelligence and Research (2010-2013); U.S. Ambassador to Bolivia (2006-2008); Chief of Mission in Pristina, Kosovo (2004-2006); and Charge d’Affaires and Deputy Chief of Mission in Santiago, Chile (2001-2004).  From 2009-2010, Ambassador Goldberg was coordinator for the implementation of UN sanctions on North Korea.  His other overseas tours included Bogota, Colombia, where he served as the Plan Colombia coordinator, and Pretoria, South Africa.

Ambassador Goldberg was a senior member of the State Department team handling the transition from the Clinton to Bush administrations, and served as acting Deputy Assistant Secretary of State for Legislative Affairs (2000-2001) and Special Assistant and Executive Assistant to Deputy Secretary of State Strobe Talbott (1996-2000). As the Bosnia Desk Officer and Special Assistant to Ambassador Richard Holbrooke (1994-1996), Ambassador Goldberg was a member of the American negotiating team in the lead-up to the Dayton Peace Conference and Chief of Staff for the American delegation at Dayton.

Ambassador Goldberg is a native of Boston, Massachusetts, and a graduate of Boston University.  Before joining the Foreign Service, he served as a liaison officer between the government of the City of New York and the United Nations and Consular Community.  He speaks Spanish.