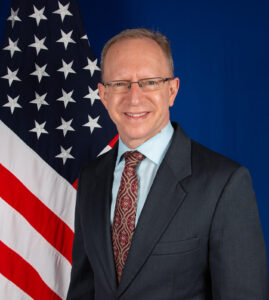 Brian Harris assumed duties as Acting Deputy Chief of Mission at U.S. Embassy Bogota in August 2021. He previously served as director of International Narcotics and Law Enforcement (INL) Bogota from July 2019 until August 2021. Prior to arriving in Bogota, Mr. Harris was director of the Office of Policy, Planning, and Coordination at INL in Washington, D.C., where he led the Department’s response to the international opioid crisis and its impact on the United States, INL’s role in multilateral forums, and the bureau’s public affairs work.

Mr. Harris previously served as Counselor for Economic Affairs at the U.S. Embassy in Mexico City from 2011 until 2014, director for North American Affairs at the National Security Council (NSC) from 2014 through 2015, and deputy director of the Office of Mexican Affairs from 2015 until 2017. Other overseas tours include Baghdad, Islamabad, Guatemala City, Warsaw, and Caracas. Mr. Harris also served as special assistant to Secretaries of State Colin Powell and Condoleezza Rice.

Mr. Harris is the recipient of numerous State Department awards, including the Superior Honor and Meritorious Honor awards. He has a Bachelor of Arts in International Relations and Affairs and Economics from Claremont McKenna College in Los Angeles, California. Mr. Harris speaks Spanish and Polish, and he lives in Bogota with his wife and two daughters.